Balance Your Hormones for Weight Loss

You can bio-hack your weight loss people! And it’s all about hormones. Allow me to explain.

You know when people talk about being overweight and rather than admit there might be a self-control issue, they say, “Well… It could be a hormone disorder.” I’m here to tell you… it’s probably both! But the good news is, you can control your hormones; they don’t have to control you. So let’s kill two birds with one stone here: balance our hormones and lose weight.

The good ones are testosterone, human growth hormone (HGH) and leptin. Testosterone and HGH make you burn fat and build muscle. Leptin suppresses your feeling of hunger. Basically, when you feel “full,” that’s leptin at work.

The bad ones are cortisol and ghrelin. Cortisol is the “stress hormone” (and there is way too much of that going around these days) and it signals fat storage in your body. And ghrelin makes you feel hungry.

There are a few ways to manipulate these hormones so that they work for you and not against you.

There’s this mistaken assumption floating around that if we simply exercise enough, we’ll lose weight. But there is one big problem with that thinking:

Simply exercising (like jogging 5 miles a day) does give you initial weight loss results, but ultimately can put your body into “stress mode” that leads to fat storage. If you don’t believe me, there’s a great example of the difference between marathon runners and sprinters. This comes from a study conducted during the 1984 Olympics of the body composition of different kinds of athletes. In terms of body fat, we saw measurements from 15 sprinters (5.5%), 13 endurance sprinters (5.4%), 9 middle-distance runners (7.1%) and 9 long-distance runners (6.3%). Marathon runners—when training for or running a marathon—use enormous amounts of calories. They use far more calories than sprinters. And yet, sprinters almost universally have lower body fat and more muscle mass than marathon runners. There is a hormonal reason for this!

Sprinting is what we call in my line of work “Burst Training.” There’s a way to do this and I’ll explain in later, but here’s what happens in the body when you focus on explosive, short bursts of activity rather than plodding along at an even pace for as long as you can.

See, all exercise causes your “stress hormone”, cortisol to rise. When you’re running or jumping or doing any cardio, your caveman body still thinks it’s being chased by a hungry predator and you get stressed out. The thing is, cortisol signals the storage of fat.

When you do burst training, though, your body also releases the hormones HGH (human growth hormone) and testosterone, which counter the effects of cortisol and signal the growth of muscles instead of fat. Weight training has the same effect – some cortisol, but more than enough HGH and testosterone to counterbalance the cortisol and spur weight loss and muscle growth.

Burst training also raises leptin levels and lowers ghrelin levels. So, in essence, it takes away the feeling of hunger while, AT THE SAME TIME, adds in the feeling of being full. Isn’t that weird? But it’s true!

What is it? How do I do it without training to become an Olympic-level sprinter? It’s actually really easy.

Rather than, say, running at a steady pace on a treadmill for 40 minutes, you vary the intensity of your workout for 20 minutes instead. You want to get to as close as possible to your maximum heart rate—but only for a short “burst.”

That’s measuring it by distance. But you can measure it by time as well. Sprint for two minutes, then do a nice jog on the third minute. Ideally what you want is two-thirds high intensity, one-third is low intensity.

Listen, if you want to lose weight, you hopefully already know that you shouldn’t be eating sugar. But why exactly?

The answer is hormones!

When you eat sugar (and carbs), your body needs to convert it to glucose—which is the type of sugar your body uses for energy. But you don’t just eat glucose, you eat sucrose and fructose and maltose, etc. So a conversion needs to take place. What signals that conversion? A hormone called insulin. So, insulin is released and then all this sugar is converted to the energy-producing glucose. After a while of this, your cells can’t handle any more insulin. They’re worn out from insulin. This is called insulin resistance and it’s the first step toward diabetes.

But what does this have to do with weight? Well, that’s just simple math. Your body doesn’t like to waste anything. If you give it sugar and it converts it to energy, but it has enough energy already, it stores the rest as fat. Simple as that. But if you’re insulin resistant, it doesn’t even make the conversion to glucose, your body just stores it away in the fat cells without a second thought because it thinks, since this stuff isn’t being converted, it must be extra. Make it fat!

An absolute crucial, central hormonal factor in weight loss is the thyroid gland. If it’s not working properly (and it isn’t for tens of millions of Americans), you’re facing a nearly impossible uphill battle to lose weight.

If the thyroid gland slows down, your metabolism slows down and you either gain weight or your efforts to lose weight are dramatically limited. The reason for this is the end-product of a chain of events that results in a hormone called T3—which signals the use of lipids in your fat cells for energy—thus weight loss. It does a lot of other things too. Thyroiditis will majorly disrupt your life.

Fixing it is usually a matter of fixing your cell walls, which involves eating a lot of fat and detoxing.  You need to stop consuming and surrounding yourself with toxic endocrine disruptor chemicals. A big one is BPA, it’s a chemical found in plastics and other manufactured products: water bottles, canned foods, mattresses, pajamas even, etc. Keep an eye out for it, but try to minimize your use of plastics especially if it comes in contact with your food or body. You can do something to counteract these hormone disruptors by making sure you Vitamin D levels are high enough (I’d say as much as 5,000 IU a day) so get some sun and eat Vitamin D type foods like red meat and fish. Also remove gluten from your diet. It disrupts thyroid function as a downstream effect of a leaky gut.

Lastly, since the NUMBER 1 hormone problem that contributes to weight gain and weight loss resistance is cortisol, and cortisol is related to stress, what do you think you’ve got to do??? That’s right, relieve some of that stress.

I am a big proponent of meditation. Do it daily for 15 minutes and you’ll be amazed that, after a few weeks, the results are undeniable. And don’t just listen to me. Google it. There are numerous studies published in prestigious journals linking stress reduction and meditation.

I also think you need a regular dose of Vitamin N—and by N, I mean nature. It lowers stress, you basically can’t experience it without doing some exercise and it’s just fun. Plus, it balances your hormones. A recent study found that people who went camping for 5 days without work or the interference of things like TV, the news, cell phones, the Internet, etc., guess what? Their hormones balanced out and their sleep rhythms reset.

Also, there is a very spiritual element to stress. Or maybe it’s mental. It’s up to you to decide. But basically, you can control your attitude. You can surrender to forces greater than yourself. Rather than getting bent out of shape over things you can’t change or the larger events of the world and universe, just accept that it’s not all on you. You’re not in control of all of it anyway. Why stress???

So, to recap: burst training, less sugar and carbs, reduce stress, minimize toxins like BPA and get into nature. Your hormones will balance out and you’ll lose weight. 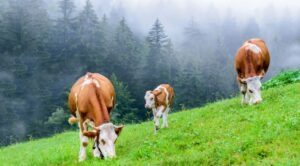 In the 1940s cows were pasture raised, grass fed and they took an average of 4 years to come to

Gut dysbiosis means there is an imbalance of microorganisms in the intestines. Dysbiosis is also known as intestinal or gastrointestinal

Placebo, Yes Please!! Nocebo, No Thanks!!