This is Your Brain Off Food

But how does fasting benefit your brain?

Interestingly, this is a question some very prominent neuroscientists have been asking, and the results are (unsurprisingly) in favor of fasting.

John Hopkin’s University neuroscience professor, Mark Mattson, conducted a literature review in his field in regards to fasting, then presented his findings to the American Association for the Advancement of Science conference in 2012. You can read a synopsis of it here; there are several interesting tidbits. But one has to do specifically with children who suffer from brain disorders like epileptic seizures. For children who participate in regular caloric restrictions, seizures start clearing up. Whereas children who don’t restrict their calories on a regular basis (assuming that means they follow the standard American diet of three meals a day with several snacking periods in between) generally see a gradual worsening of their epileptic seizures.

According to Mattson, when food is scarce, the brain undertakes protective measures that have the effect of guarding against oxidation and protein plaques while also inspiring the brain to make new cells. This mechanism also protects against diseases that tend to affect adults and the elderly, namely Parkinson’s and Alzheimer’s.

A 2003 study published in the American Journal of Clinical Nutrition tested caloric restrictions in a variety of animals. They found fasting extended the lifespan of everything from worms to mice to fish to even yeast. While the study acknowledged it wasn’t quite sure why this was the case, researchers did point out that fasting mitigated several factors involved in the aging process, such as lowering oxidative stress, increasing insulin sensitivity and reducing metabolic rate.

Interestingly, the study stated that caloric restriction studies on humans were primarily limited to somewhat unsavory conditions–periods of famine, war, etc.–which introduced too many variables to draw any hard conclusions. They did, however, reference the “Biosphere” experiments of the 1990s in which participants willingly entered a sealed environment where they were required to grow or cultivate all of their own food. However, during the “Biosphere 2” experiment, the 8 residents of the biosphere were unable to generate as much food as expected and so their caloric intake was significantly reduced. All 8 participants exhibited physiological, hematological, neurochemical and hormonal changes that “mimic(ed) many of the effects previously observed in rodent calorie-restriction studies.”

In short, fasting makes you smarter. First of all, fasting initiates a mechanism for the creation of more neurons. Secondly, hunger and the search for food in all animals (humans included) cause perhaps the greatest increase in mental activity of any activity. This is likely an evolutionary necessity. That is to say, animals whose brains light up when searching for food are more likely to find it, thus more likely to survive.

However, much of the reason for increased cognitive function as a result of fasting has to do with the balance of two key hormones: leptin and ghrelin. Mattson says:

When you are not overweight, these hormones encourage growth of new brain cells, especially in the hippocampus. This is the area of the brain which is involved in laying down memories. If you start putting on weight, levels of ghrelin drop and brain cell replacement slows… The good news is that this brain-cell damage can be reversed by the two-day fasting regime.

What doesn’t kill you makes you stronger

Why does fasting have such a powerful effect on the brain? It turns out, it’s basically a version of the old chestnut above: “What doesn’t kill you makes you stronger.” Or, as philosopher Nassim Taleb would call it, it makes your brain “Antifragile.”

Challenges to your brain, whether it’s intermittent fasting [or] vigorous exercise.. are cognitive challenges. When this happens neuro-circuits are activated, levels of neurotrophic factors increase, that promotes the growth of neurons [and] the formation and strengthening of synapses.

This fascinating strategy works for muscles, bones and other organs as well. Fractured bones repair themselves to where the area that was damaged is significantly stronger than the surrounding bone. Micro-tears in muscle fibers grow back with stronger and more massive tissue. The body (and nearly every aspect of life and societies according to Taleb) gains from unexpected events, chaos, and stress.

Here’s to not eating. 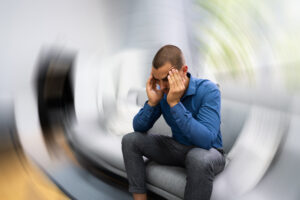 Have you ever been dizzy or lightheaded? Not what happens when you get up too fast, but an “out of 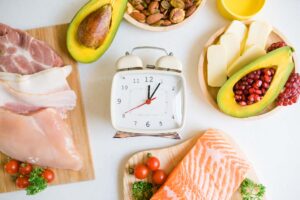 The EASIEST Way to Turn Your Health Around: Stop Eating

No, not forever. Not even for that long. In some cases, not even for a full day! I’m talking about 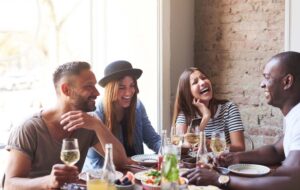 Tips For Staying “On Diet” When Dining Out with Friends & Colleagues

One of the most frequently asked questions once committing to a new healthy lifestyle is, “How do I maintain this