Glyphosate: A Poison You Are Eating AND Being Exposed To Daily

Most people think Glyphosate (aka Roundup) was originally developed by Monsanto as a weed killer. Glyphosate was discovered in 1950 by Swiss chemist Dr. Henri Martin – who originally developed a pipe cleaner that had exceptional chelating properties (it can remove/descale accumulated calcium, minerals and scum from within pipes, boilers,radiators and other water systems). IN 1974, Dr. John Franz, chemist at Monsanto, dis-covered that Glyphosate could be reformulated to act as a pesticide/weed killer and thus birthed Roundup – the household weed spray that by the time you finish reading this you will hopefully discard via a bio hazard bag with your local county recycling center.

Today Roundup is used primarily to killing weeds in your yard and is used commercially by almost all non-organic farms on their crops. But remember, it was first designed and patented as a metal chelator (remover) as it has the ability binds to minerals (like calcium) to clear them out. That’s great for pipes, but not for humans (pets included) who need these essential metals/minerals to stay strong and healthy.

Roundup also wreaks havoc on your intestinal microbiome, killing off beneficial bacteria which allows other dangerous pathogens (viruses, parasites, resistant bacteria etc) to overtake your healthy bacteria, creating dysbiosis and leaky gut. Your gut has thou-sands of different types of microorganisms, most of which are bacteria that research is saying are vital to your health, both physically and mentally.

Due to the advent of “Roundup Ready” seeds, which most conventional farms use when growing cotton (ie your clothing is contaminated), corn, wheat and soy (ie all processed and packager food is contaminated). Roundup ready seeds cannot sprout or grow to full yield unless sprayed with roundup – that’s why the vast majority of our conventional food supply is contaminated with Roundup – ie you and your family are eating it (even vegans eat it!)

Let’s talk about your food for a moment. If you are saving money by opting for non-organic fruits and vegetables – it’s worth noting that after Glyphosate is applied to crops it tends to accumulate in leaves, grains or the fruit of the crop. Further, Glyphosate residues cannot simply be removed by washing plant-based products nor can the residues be broken down by cooking. Worse yet, Glyphosate residues remain stable in foods for over a year, even when foods are frozen, dried or processed! Even worst, proteins (fish, chicken, turkey, beef, pork etc) are consuming grain based feed that is contained – making them also contaminated.

This is why eating only certified organic, non-GMO, grass-fed, grass-finished, wild caught, free range etc is not only important but REQUIRED if you want to remain healthy in this day and age.

Glyphosate poses an enormous health risk because of your constant exposure (clothing, food/drink, and direct use). While each instance of contact with glyphosate may seem small, they all add up — especially since this everyday toxin “tricks” your body into storing it, by mimicking other essential nutrients.That puts you at higher risk for many troubling health issues, including:

According to FoodBabe.com Glyphosate has been found in the following foods:

– All Grain Based Cereals (General Mills, Kellogs etc) – Cheerios being the highest!

– Most grain based beverages (Beer) – Coors/Budweiser being the highest!

– Most grain based crackers – Ritz and CheezIts being the highest!

– Most grain based chips – Frito’s being the highest!

– Most boxed or bottled juices – Tropicana being the highest!

(A complete and exhausting list can be found onwww.AskDrErnst.com)

Some of the most interesting things found to be contaminated with Roundup include:

While it may seem impossible to avoid Glyphosate and other pesticides, there are things you can do to protect yourself and your family from the harm these toxins can cause. Eat only organic, non-GMO fruits and vegetables. Remove cotton clothing and replace with organic clothing. Consume only animal proteins that also eat organic non-GMO feed. Perform a Glyphosate/roundup detox and test your bodies accumulated levels annually to confirm they are dropping over time.

1. Stop putting it in your body then

2. Test your body to determine your Roundup Toxicity and then

If you wish to activate a Roundup/Glyphosate detox for yourself, please ask Dr. Ernst or Dr.Pelofsky for more information.

Breakfast Cereals as Tested by the Environmental Working Group (2018)

Staple Crops as Reported by Friends of the Earth Europe(2013) 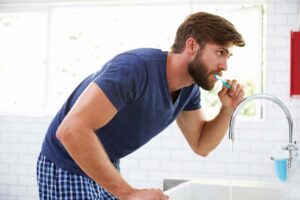 Have you ever examined your tongue, especially early in the morning, and found a white film coating the back half

What’s In Your Medicine Cabinet?

Let’s talk about your medicine cabinet. Maybe it’s a whole cupboard in your kitchen. Maybe it’s behind the mirror in